What are the differences between Direct Drive and Bowden type?

Not all FDM (Fused Deposition Modelling) 3D printers are the same. According its extrusion system, we can find 3D printers with direct drive or bowden type. By general, there is a lot of ignorance about this issue. This, it does not mean that an engineering degree is needed when you are 3D printing, but it is always convenient to have some basic notions about certain printer functionalities, that we consider essentials, and they can affect the choice of the machine or the material with which we want to print. Now, we are going to distinguish the two extrusion modalities that a 3D printer can have. 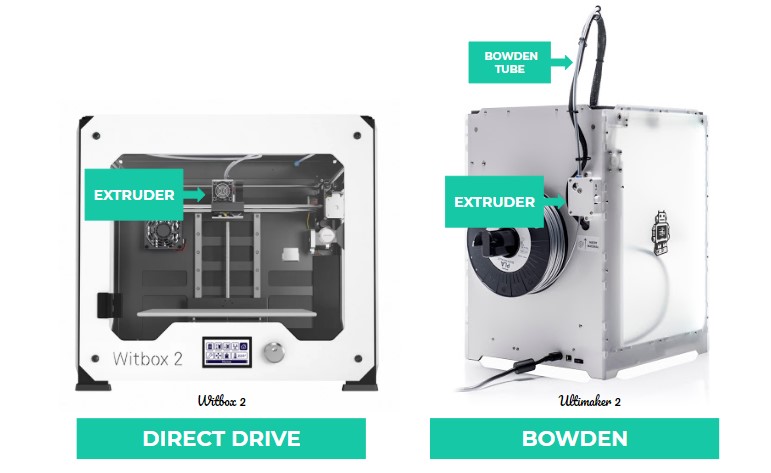 What is an extruder?

And first of all, let's see what an extruder is. An extruder is one of the most important parts of any 3D printer with FDM technology. This is the mechanism that is responsible for pushing the filament from the spool to the hotend to be cast. There are two extrusion systems, direct drive and indirect or bowden systems. Let's see below what each of these drive systems and their types of extruders.

This type of extruders are the most common in 3D printers, although in recent years this trend is reversing. Its main feature is that the extruder, with all its components, is mounted all in one piece.

Direct Drive extrusion consists in placing the motor that pushes the filament directly on the hotend. In others words, in this drive system, both the extruder and the hotend are attached to the moving head of the 3D printer without being separated by a tube. It is the ideal system to extrude flexible filament, since its advantage is that it exerts the thrust of the filament near the hotend and it is easier to calibrate it. In this way a good control of the retractions of the material is achieved to obtain a better finish in the pieces. Also, and most importantly! It allows us to print flexible filament like Filaflex. 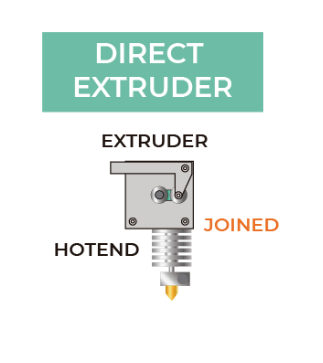 On the other hand, indirect extrusion or bowden type consists of removing the thrust motor from the filament, the moving parts, and placing it in the structure of the printer. So that the filament does not pass directly from the motor to the hotend, as it happens in direct extrusion, but with this technique the filament is guided to the hotend through a tube. This tube is usually made of PTFE (polytetrafluoroethylene, better known as Teflon) and has an internal diameter greater than that of the filament to compensate for the manufacturing tolerances that the filament may have and that no clogging occurs.

Bowden extrusion has the advantage of reducing the weight of moving parts, which means being able to print at higher speeds. But it is an inconvenience as it is a system that is susceptible to jamming and with which it is more difficult to control the retraction. In addition, given the complexity that exists at the base, of pushing a flexible filament through a tube, from the bowden to the hotend, it becomes very difficult to print with flexible filaments. The greater the flexibility of the material, the greater the likelihood of jamming in the tube. 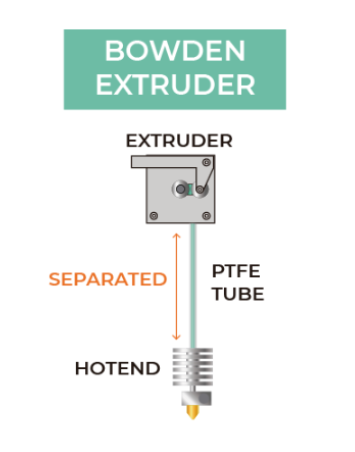 That is why we know many myths about the impossibility of printing flexible filament on 3D printers with extruder and bowden tube. But there are multiple solutions that will allow us to print flexible and even very flexible materials on these machines, and we will see later.

Differences between direct drive and bowden | pros and cons